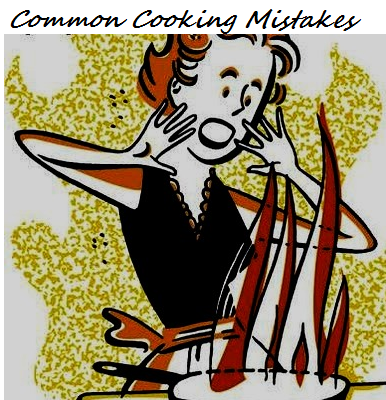 It happens to everyone. Despite our best efforts in the kitchen, something goes terribly wrong and the dish is tough, mushy, too salty or lumpy. Whatever the case may be, we stuck with a lousy plate of food and a bad mood. But take heart: The most common blunders are also the easiest to prevent in the future with the help of these Smart Samayal Tips...

Even if you're in a hurry, waiting for the pan to heat up is well worth the couple of minutes lost. Adding food to a pan that's not ready will result in pale stuff -- and it could also cause food to stick to the pan.

If the saltiness is the result of an over-reduced soup or stew, add water or add few drops of lemon juice to overcome saltiness.

Proper maintenance of cooking utensils is also an important aspect of better cooking, and badly kept utensils can prove to be one of the biggest cooking mistakes. The cast iron pans require a special treatment while washing, because normal soap water and scrub tend to wash away the coating from the pan's surface, which works as a non-stick agent that prevents food from sticking to the pan.

Sautéing wet leafy greens can present two problems. Firstly, the veggies will lose their flavor and color because the excess water on leaves comes in contact with the hot pan and creates steam. This causes the veggies to lose their vibrant color and texture. Secondly, the hot oil does not react well with water, and may splatter after coming in contact with cold water.
Ignoring minute details of the recipe while reading it may lead to unhappy result. Be careful in reading and following the recipe.
Cooking with wrong oils will spoil the entire food.

The difference between a boil and a simmer may seem slight (a simmer means bubbles come to the surface every second or two, a boil means the water is rapidly bubbling) but it makes all the difference when cooking. Boiling instead of simmering can result in a tough, dry or cloudy final product.

If you want that nice brown sear on roasting vegetables like potato, cauliflower etc., give it time to brown. Resisting the urge to handle the food while it's cooking is hard, but having that self-control will determine if you get a nice crust on your food or not.


You may have heard it a million times, but do you practice it? Do you taste your food as you cook it? If you don't, you really should start. Recipes aren't always accurate and can often times lead you astray. Tasting your food as you cook means the difference of a mediocre meal or a delicious one.

Overcrowding the pan is a common offense among home cooks. How many times have you just wanted to fit a few more pieces of  veggies to a pan rather than cooking in batches? Well, you end up with soggy food that doesn't brown if you don't give your ingredients enough space. Food releases moisture when heated, and space in the pan allows for the steam from the moisture to escape.

You know what happens to vegetables when they've cooked too much? They turn to mush. The reason this happens more often than not is because vegetables keep on cooking if hot (even if taken off the stove). One good way to avoid this is to stop the cooking by running the finished veggies under cold water.