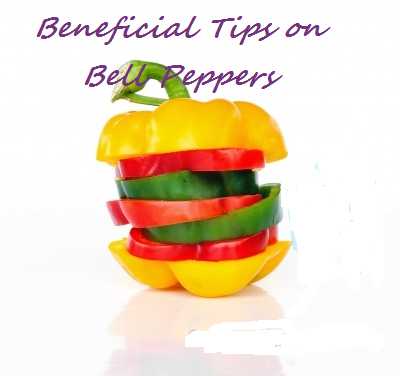 Bell peppers can add a delightful zing to lots of different dishes. Not only do they come in different sizes, colors and shape, but they all pack a different punch!These peppers have a wonderful taste and texture but are not hot. They are eaten raw used in  salads or on a platter with other cut veggies and some dip.

Bell  peppers are eaten raw or cooked and are good in salads, savory dishes, stuffed or eaten on their own.

A pepper has the strongest taste when considered mature, but not fully ripe. If the peppers are not harvested when mature but are allowed to ripen on the vine, their taste will become progressively mild and sweet until they are fully ripened. Sweet peppers are available throughout the year but more varieties are available in July, August and September.

Red, yellow and orange peppers are sweeter than the green ones, because the green ones are not ripe. When buying bell peppers, look for clear, shiny, intact skins. They should feel firm and heavy for their size.

They can be stored for at least a week if placed in a plastic bag and kept in the refrigerator. The riper the pepper is when harvested, the less time it will maintain its freshness.

How to cut a Pepper?

When it comes to preparing bell peppers, first wash and dry them. Then, remove the stem by cutting around it in a circle. This gets rid of most of the seeds. When you look inside, you’ll see the white “ribs”; slice down the ribs, so that you have three or four pieces of pepper.

Some interesting recipes with bell peppers:

Heat butter in a pan, saute finely chopped garlic and onions of 1 tb spoon each.Then add pieces of chopped green bell peppers, a tomato, a green chilli and some coriander leaves.Pressure cook them till 1 whistle. Make the mixture into puree in a mixie. Strain the puree. Add some vegetable stock to this puree and boil it with required water adding pepper powder , salt and a tea spoon of sugar.Make it thick by adding cornflour mixture or cream and serve hot.